The August Newsletter is out!! 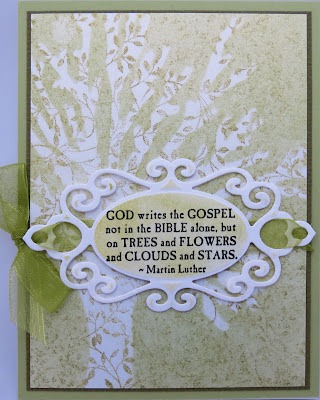 I'm pretty excited this month.  The August Technique Junkie newsletter is out and I have 7 of the 15 tutorials are ones that I submitted.  Coool, huh?  ;-)  So.......during this month I'll be posting not only the cards that I did for newsletter samples but the cards I did for the tutorial samples as well.  I hope you enjoy them all.  Today's technique is NOT one that I submitted.  It is called mask and blend.  I used a paper from Paper Temptress for this technique that has a beautiful shimmer to it.  I tried to leave the samples I did for this technique more simple because I really wanted to show off the beautiful background.  The verse is from Stampin Up.  Hope you enjoy.

My weekend was pretty busy.   The car club we belong to had their yearly large event.  BUT this year it wasn't very large.  Since we were basically starting over with the cruise-in being in a new location, the numbers are slow in building.  Last year's event was only a poker run and we had 25 cars.  this year we added a cruise-in at the end and increased it to only 35.  VERY dissappointment.  We could have had up to 200 in the area we had.  We should have had that many too!  The darn event was FREE!  BUT there were a lot of other events going on at the same time.  We really need to revisit the date we picked and possibly go back to the third Sunday in July.  We seemed to bring more cars on that date.  We used to get up to 300!  Returned the borrowed cones on Monday morning and really wrecked my back.  Monday afternoon was spent on the couch giving it a rest.
Posted by Ann at 3:16 PM No comments: 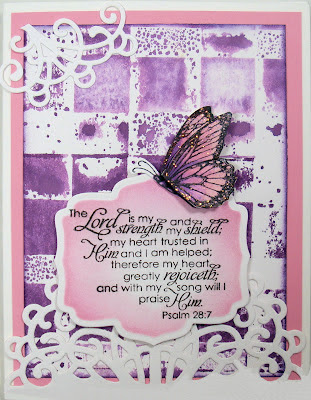 Here is my second sample of Acrylic Block Taping.  I really love the dies from Heartfelt Creations.  They really add that pretty scroll work to the card. The Scripture is from Sweet N Sassy Stamps.  Not sure about the butterfly....the stamp room is far away!
Posted by Ann at 1:25 PM 1 comment:

So.......I'm weeding in the garden.  See some morning glories in one of the beds and think....I better get rid of them when I see them!!  They are just a pest.  So I start weeding when BAM!!  I get stung by a yellow jacket.  I said some really bad words as I ran away. Came in the house and put some googled bee sting treatments on the sting.  Still hurts like the dickens an hour later.  Hopefully sleeping won't be an issue!

Speaking of sleeping.  I sure seem to have gotten a lot of couch time in the last 24 hours!  Came home from our car club's big event of the year (our cruise-in) and crashed on the couch.  Slept for three hours.....I was really tired!!  Got up to go to bed (hee hee).  About midnight we get a call from our daughter.  We went to her house for three hours last night while she went to ER to have her head examined.  She got hit in the head with a softball yesterday in their game.....really hard.  At midnight she felt a little sick to her stomach and decided to make sure she hadn't crack her skull.  CT scan said nothing broken so she just had a bad concussion.  Gave her medicine for the nausea.    Thanking God that her skull wasn't cracked.   As she was getting ready to leave ER last night she said to the Doctor.  "So.......can I play in the game tomorrow?"  He started to hem and hah with an answer and she said "Just kidding!"  ;-)

Thinking of how much her head hurts, my bee sting seems like a drop in the bucket really.
Posted by Ann at 8:51 PM No comments:

Last but not least in the recent Technique Junkie Newsletter was my technique called Acrylic Block Taping.  I stumbled upon this technique while making cards for another.  It was very fun to do and you never really know what the results will look like!  Here is the first card I made with it using a stamp from Kimmie's Creations (I think that is the name!!).  The mice were colored with Copics and the cake has lots of sparkle too! 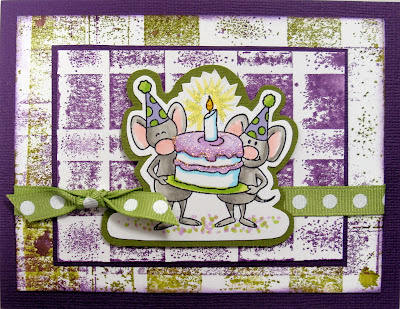 Last Tuesday was my Copic class at Main Street Stamp and Stationery in Tigard.  I had 11 in the class.  What a great bunch of ladies.  One older lady didn't know much about coloring with the pens but she sure was a natural!  Several of the other ladies told me that it was one of the best classes they had ever taken!  ;-)  .......(that's me smilin' from ear to ear).  Always wonderful to know when you've done something right!  The class is 2.5 to 3 hours long and they get a manual when they are done and lots of knowledge to color successfully!  My next class at Main Street Stamp will be on August 4th.

Here is a picture of me and Main Street Stamp's leader, Debbie!  My sample board is behind us.  I'm sporting my new "Copic" T-Shirt as well.  Makes me feel so teacherish!    A special thank you to Debbie too.........I got part way to class (30 minute drive) and remembered that I didn't have my reading glasses....sheesh!  Debbie was kind enough to let me borrow a pair!  {mwah} 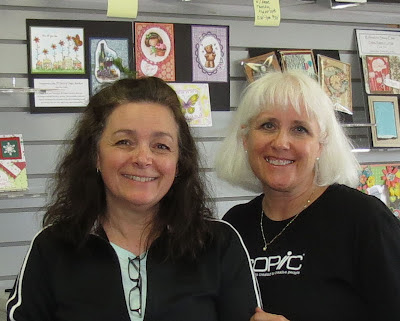 What to do with old techniques?

With the Technique Junkie Newsletter being my best friend, I do end up with a lot of little pieces that I just hate to throw away.  Thus, I came up with this technique to use them called Technique Strips.  Start saving all those thin strips now!  Here are both cards I made for the samples for the tutorial. 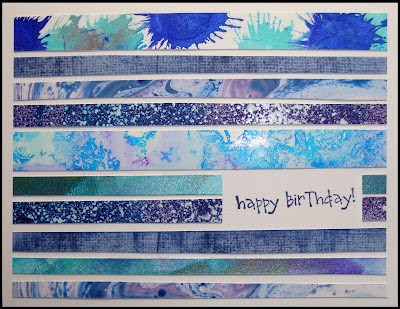 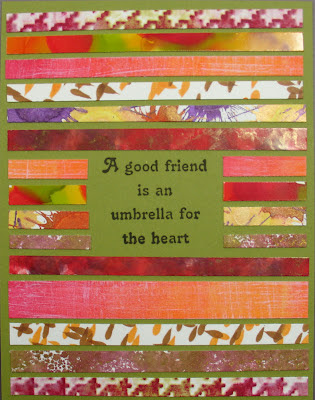 Here is the second card using the Distressed Spritzing technique from the most recent TJ newsletter.  This one used a big butterfly stencil and a digital butterfly from Sweet N Sassy Stamps.  She has some awesome digitals as well as clear stamp sets.  Paper on this card was also from Paper Temptress (link on sidebar).  It is so hard to cover up a pretty backgroun like this, don't you think?  The paper that I used is a Matte coated paper and is just perfect for this technique!!  Get it from paper Temptress! 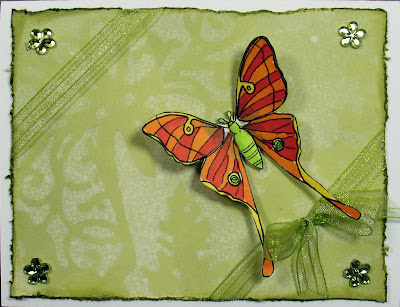 This month's TJ newsletter has distressed Spritzing as one of the technique.  WAY fun.  Here is my first card using SmARTworks nest and a Crafter's workshop stencil.  The paper I used was from Paper Temptress......the GO TO place for unique papers!  I have a link to her on my sidebar.  Kept it somewhat monochromatic for that soft look. 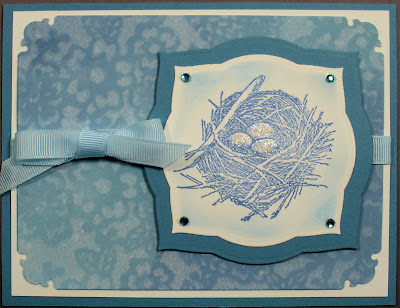 Today is the birthday party for my grandson who is turning 4. His favorite TV program is Octonauts, a darling cartoon about 8 animal friends who live in the Octopod in the ocean. They go on adventures and discover all kinds of different sea creatures. They end up helping the sea creatures along the way. The only problem is that all Octonaut things are sold in the UK or Australia. So......I found this darling image from a free coloring sheet from one of the UK sites. Since they live in the ocean, I used a piece of Simple Sumi (a Technique Junkie technique) for the background since it looked like water. It is hard to tell but I layered the head and shoes and double layered the hat, eyepatch and nose area. I hope my grandson loves his Kwazii (the cat) card! Kwazii's favorite saying is Yeow! 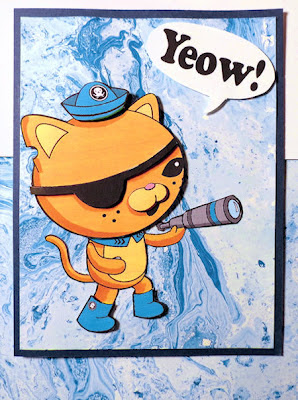 I hope you love my giant flowers.  I had stamped the houses after I colored the rubber with copics and spritzed with blending solution (copic blending solution NOT Ranger.....NEVER atomize Ranger's).  They were a little more faded than I wanted so I enhanced their lines with a copic multiliner.

After looking at the sky I had created airbrushing the copics, I thought that sky could really use something...voila....the flowers!  Way out of porportion but I like it and I hope that you do too!  I wish the subtle airbrushing for the sky showed up better but scanners are not good for subtle stuff.  This is the last card I created for my copic class at Main Street Stamp in Tigard. 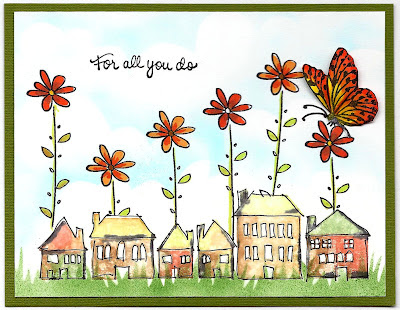 This little girl is just so adorable.  This is the 4th and last card I've made for my copic class at Main Street Stamp and Stationery.  I would have colored her face a little differently had I the ability to use pens outside the boundaries of what the store will offer.  But you want people to purchase what the store has and not want what they don't!    I had to really work hard for the 'halo' of color around her as the pen was MUCH darker than I wanted.  I had to really fade it out with my blender.  First time I've gotten to use this Spellbinder's die as well.  I wish there were more sizes with it.  The sentiment could have used a smaller one but since there wasn't one, I tucked it under the larger one!  Before I had decided to use the die around the sentiment, the little girl was more centered and you could see the cutting I did on the background layer.  You can't see it much now.....  ;-)  Hope you like. 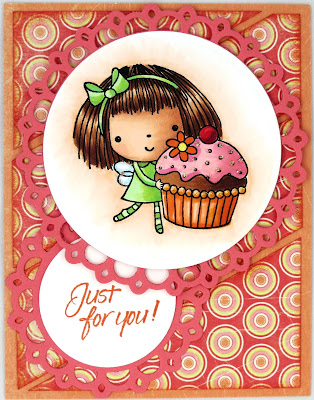 Sometimes it is hard to make samples for a class and try to stay in the confines of the stamp companies they sell and the copics they will offer.  Fortunately I had several of the stamps they were selling.  The other cards I made were images of companies that they carry but not necessary have that particular stamp in stock.  The background stamp and sentiment are from Hero.  Inkadinkado made the wine stamp. 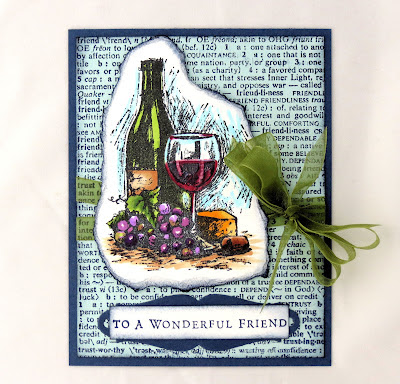 Here is another card for my copic class sample board.  The butterfly just shows color blending.  I also created the background paper using my copic and air compressor.  There are several butterfly cutouts for the layering but you really only see the Martha Stewart punch butterfly.  This is the first time I've gotten to use parts of the fleur de lis dies from spellbinders. 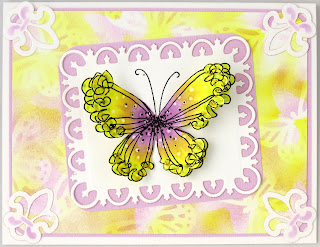 Here is a cute little card I made as a sample for my upcoming copic class at Main Street Stamp and Stationery in Tigard.  I textured the cute little Penny Black bear.  Since they are going to be selling copics from the Papercrafter's Set A, I've had to stay in that color selection.  Somewhat hard for me but it has been good to stretch the color imagination a little! 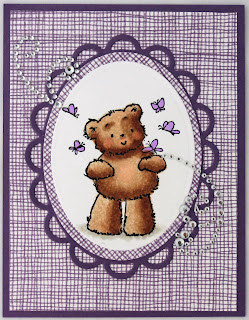 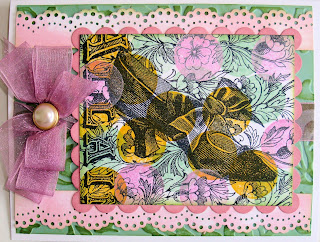 Color up your collage background stamps fast with this technique!  That cute stamp is from I Brake for Stamps.  They have some wonderful stamps.....go take a look!  I gave this to my step mom for mother's day.
Posted by Ann at 11:58 PM No comments:

Today......was a LONG day!  I was on the road by 7am to travel to Eugene to teach two copic classes at Karen and Friends Creations in Eugene.  Karen has a great scrapbook/stamp store.  Two full classes with 10 in each class.  Here are some pictures of me and Karen and several of the second groups of ladies.  Got home about 8:30pm tonight!  ;-)  A good day. 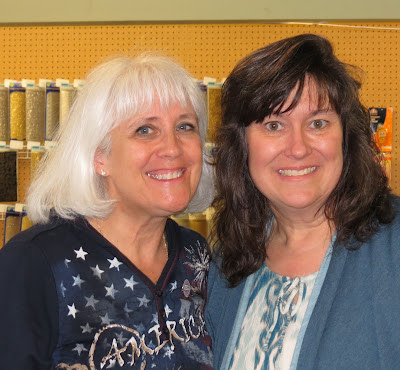 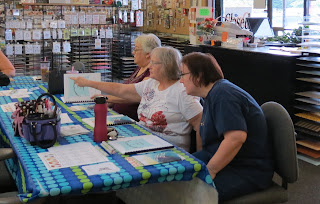 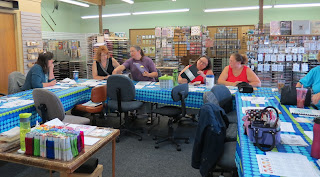 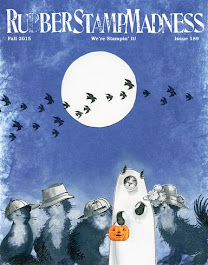 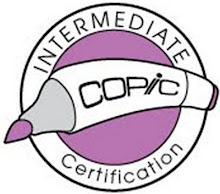 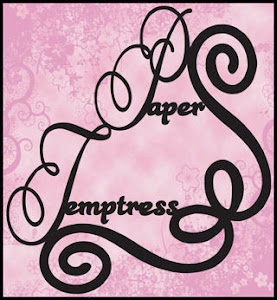 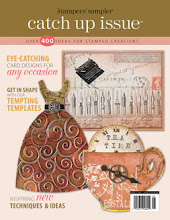 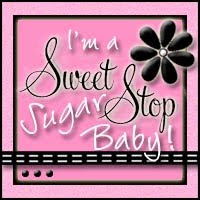 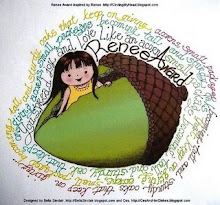